You’ve probably encountered Minimalism in the arts: visual artists like Frank Stella and Donald Judd, composers such as Philip Glass and Steve Reich, and writers including Raymond Carver or Richard Ford.

But none of them are going to save you any money.

There are tons of minimalist bloggers and lecturers, however, whose impassioned posts and speeches promise to not just save you money but to reduce debt. There’s no magic bullet, mind you: It takes conviction and seemingly (at first), a lot of personal sacrifice. But it’s well worth the effort.

Just a few words about Minimalism and money

Debt, insist these light-loaders, isn’t a random state of affairs that you tumbled into. It’s the predictable consequence of living beyond one’s means. Whether you overdo it financially (by buying too much stuff) or with any other over-indulgences, you will inevitably find yourself out of balance and struggling to re-establish equilibrium.

But there’s good news from this restrained, minimalist milieu. By intentionally cutting back on all levels, you will not only eventually climb out of debt, but you will feel freer, less encumbered, happier and better equipped to pursue your life’s passions.

This army has no official leader, but capitalize the “t” and the “m” and you get a pair of hugely popular influencers, The Minimalists, aka Joshua Fields Millburn and Ryan Nicodemus, who preach what they practice to a choir three million strong.

Here’s a snippet of the mission statement on their nearly five-year-old blog: “Minimalism is a lifestyle that helps people question what things add value to their lives. By clearing the clutter from life’s path, we can all make room for the most important aspects of life: health, relationships, passion, growth, and contribution.”

For better and worse, the Minimalists have spawned countless related blogs, mostly penned by people who felt buried alive by their debt and their stuff and decided to do something (radical) about it. 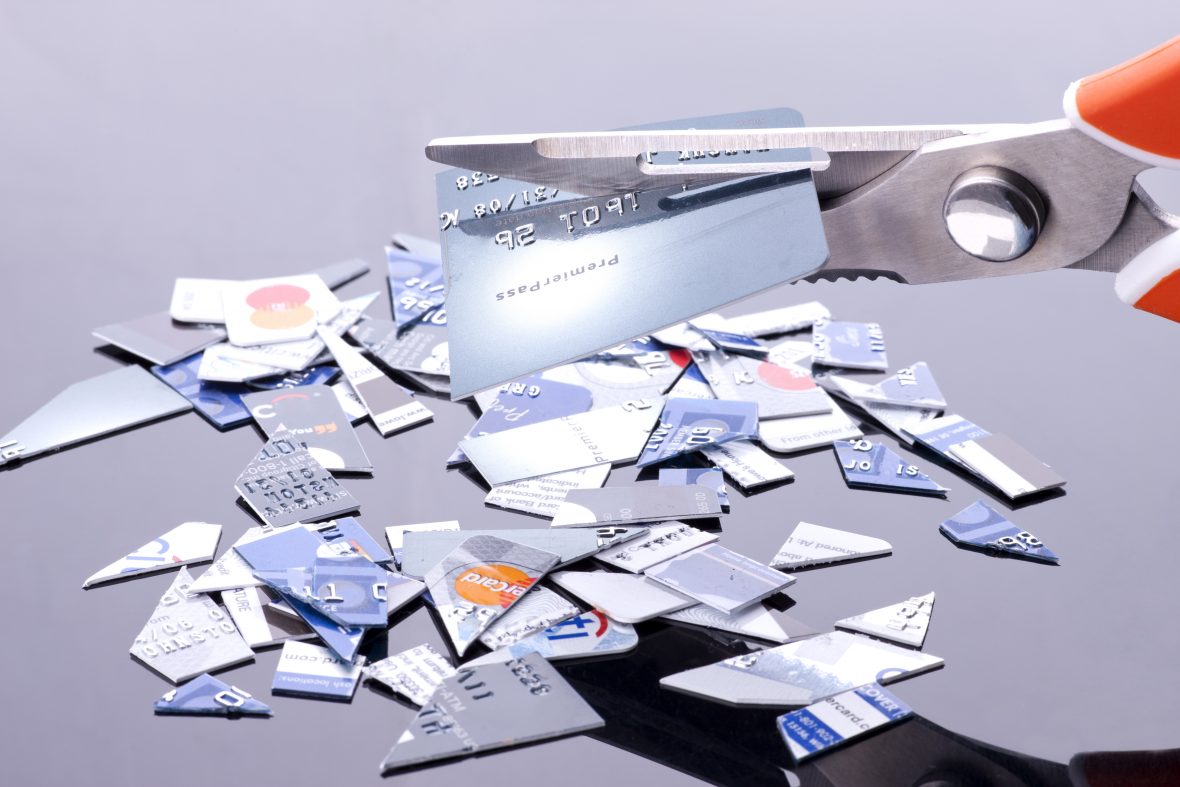 Cutting up most of your credit cards for financial freedom is one way to make a change. Personal Finance tip, not closing the cards after they are paid off will improve your credit score.

On a blog called Ready for Zero, Shannon shared her personal journey to solvency, then asked, “Can the minimalist movement also help you pay off debt? And how?”

The post is her answer. “The simple act of clearing through the clutter—even if you don’t think you have clutter (pulling things out of closets and out into the open is a real eye-opener)—has a way of also clearing through mental clutter and making room for … a fresh perspective,” she writes.

Her real point is that many people acquire debt trying to fill emotional holes with stuff, but no matter how much they have, they still feel deprived. The simple (yet arduous) exercise of decluttering your home can be the most exquisite reality check on how not deprived you are. When Shannon did this, she saw that she had much more than she realized—and much more than she needed, which left her enraged. “Here was the pile that led to my daily financial struggle…had I been given the choice, I would have given it all up to never have had debt.”

Granted, not everyone with too much debt is a Home Shopping Network addict. Much debt in this country derives from college loans (our own, our kids’), priceless family vacations, new cars purchased after the old clunker has taken its last victory lap… or burdensome mortgages and medical bills. Regardless of what created the debt, one is left with the same dilemma: How to get rid of it.

We love success stories, and this sector of the blogosphere is rife with them: How super-motivated people pay off five-figure debt in 18 months by taking extra jobs and paying huge amounts on their Visa bills. And how after a year of living frugally, their whole approach to consumerism changes. They cut up their credit cards, they make and adhere to a budget, they sell their no-longer-desired valuables on eBay and become splendid cooks and baristas.

Fight the impulse for “more” by pursuing happiness with “less.” Here are five satisfying things you can do to chip away at your own debt.

1. Actively work on paying it off. Try the Debt Snowball Method, based on psychological and financial principles. The game: Pay off your lowest balances first. The positive feedback of debt reduction gives you the momentum—and motivation—to keep at it.
2. Declutter. Take a few months to evaluate all your possessions—ruthlessly. Donate, repurpose, give away and throw away as much as possible. Sell good clothing at upscale consignment shops. For the rest of the stuff, hold a massive garage sale, or make Craigslist and eBay your BFF.
3. Research whether you can lower payments on your auto, home and life insurance. Better yet: Lose the car. Seriously, if you have a car loan that won’t be paid off in the next year or so, consider selling your car and buying something outright. Throw the remainder at your other debts.
4. Get rid of anything that could be called a “want” and not a “need” until you’re (almost) debt-free. Think cable TV, home phone, spa and salon services.
5. Dust off your cookbooks and eat in. Shop at Costco, exploit grocery-store sales, flex your culinary muscles, and learn to make a mean latte. Double recipes so you can brown-bag it for lunch.

Paying Off Credit Cards Using the Debt Snowball Method Grab a nice cup of (iced!) coffee, sit back and let’s discuss the debt snowball method, one of the most effective ways at paying off debt. If you carr...
5 Tricks to Save Money When Buying an iPad This Personal Finance 101 blog post was written by guest author, Stewart McGrenary, Managing Director of iPad-Recycle.co.uk, specializing in recyclin...
Money Management Tips – Finding the Hidden Cost of Purchases Think that rock-bottom, factory-closeout price is a great deal? Think again. If you learned to speak Minnesotan from Garrison Keillor on his iconic...

I’m writing today with an update on what we’ve been working on since our last blog post a couple of months ago. Before I discuss where...

We are firm believers in setting up an #EmergencyFund Here is a great primer for how to get yours started:… https://t.co/H9KKx5mNco